Yup, that's what Mel Lewis said, as stated by John Riley in "Beyond Bop Drumming." At the time, John thought it seemed like a bit of hubris, but Mel had a very good explanation. You see, Mel strove to be such a proficient player that even on an off night he was still plenty good at his job. 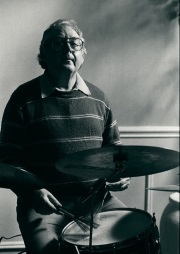 Mel said that his role was to keep the band swinging regardless of his personal situation. And that's how it should be: You really need to have more than enough ability to do the job required. Mel also confided that he was the only one who was ever aware of when he was not on form. That’s a pretty good record.

I had an off night recently. Everything went OK at the gig, and we got very good feedback from the audience -- and the owner (no small accomplishment). But I was not happy with my playing. It happens. The interesting thing is that I recorded our sets that night. When I listened to the tracks a few days later, everything sounded fine, and I would never have guessed I was out of sorts. So, was it truly a bad night?

John Riley goes on to explain that Mel's attitude is nothing more than well-earned confidence, backed up by skill, knowledge and experience. And confidence plays a big role in everything we do. Buddy Rich could be very matter-of-fact about his playing. But his point was simple. If he was playing well, why not just feel good about it? To say "I'm playing well" is a far cry from saying "I'm the greatest."

It’s important that we take pride in our work and do the best job we can, with a steadfast goal of “better than last time”. I go into every situation prepared to do the best job I possibly can, off night be damned. And if I’m having a good night, so much the better.

In a way, I suppose I could also say I too have never had a bad night, because getting out and playing automatically makes for a good night, right?

So thanks for the positive spin, Mel.

Drum Yoda: Teaching a Musical Approach to the Drum Set

Get new blog posts delivered to your inbox